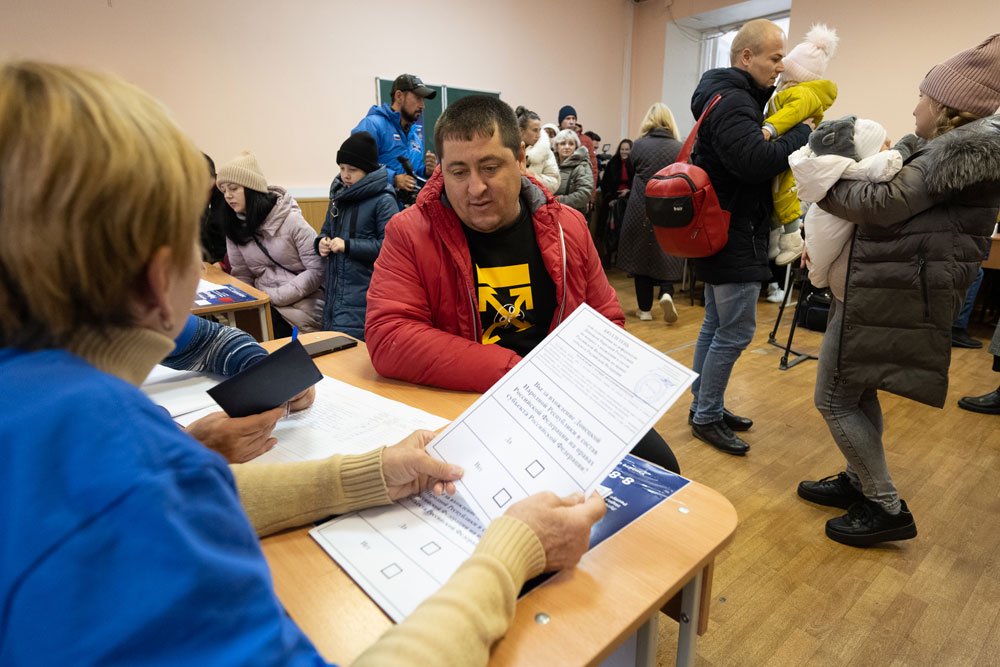 It was planned that from September 23 to 26 they would take place outside the premises of polling stations: according to information received about the whereabouts of refugees in the cities of the region, at temporary accommodation points, and only on the last day – at polling stations in Yekaterinburg. But people asked to organize voting in Yekaterinburg right away.

So they did. Voting points of all four territories were placed in the regional House of Volunteers, where refugees from the DPR, LPR, Zaporozhye and Kherson regions came in previous days.

On the last day of the referenda, a large influx of people was expected, so the organizers invited amateur artists to the House of Volunteers, and an impromptu puppet theater was arranged for the kids. And for good reason: many voters came to the polling stations with their children.

– I am from Lugansk, – says Sergey Savenko, a member of the LPR election committee, – we have a miner’s family: both our parents and us. In Lugansk, people have always lived in poverty – such is our region. In addition to working at the mine, we also kept two cows – in general, we just survived. Therefore, I am not proud of anything that we lived in Ukraine: it did not give anything to either my parents or us. They would have given free rein, as we asked, they would have lived on: they would have fed themselves, they would have rebuilt everything themselves. But no will was given to us! We left our village due to hostilities: the Ukrainian military almost completely destroyed it. The whole family left: wife, daughter and son. Our daughter is already an adult, she and her boyfriend stayed in Voronezh, and our 15-year-old son is with us in the Urals. For the time being we are living in a TAP, but we already know where we will go after the referendums: to the coal mines in Yakutia, both my wife and I are miners. And we hope that everything will be fine with us there. There are already many of our countrymen and relatives in Yakutia – these are those who left back in 14, they settled there and are not going to return. I received an answer: they are waiting for us.

According to Sergei, fellow countrymen are very actively participating in the survey with great desire, and it could not be otherwise.

– We are from Ugledar. We arrived in Russia in August: daughter, son-in-law and grandson, – says Lyudmila Gerasimova. – Daughter and son-in-law have already voted, and here I am – today. I voted for the war to end quickly, so that we could be together. Together – we are force! And one at a time – see how. What did they want to achieve? They knew what we voted for in 2014 – the whole Donbass! But they did not accept this – they immediately brought in troops, began to bomb Donetsk ….

So far, Lyudmila Sergeevna has no definite plans for the future: the family is busy with paperwork – it draws up Russian citizenship. But, like many residents of Donbass, the Gerasimovs want to return home.

“But it is necessary that we be together with Russia, so that they are finally driven out of there, and we will return, and we ourselves will rebuild everything and improve our life,” the woman says.