Speaking about the place of Russia and its economy in a world that is undergoing serious and, in many respects, crisis changes, President Vladimir Putin proposed a program of action. It concerns, first of all, the state, which will have to deal with the liberalization of laws governing business, the development of infrastructure, investments in technology and, of course, social reforms. At the same time, Putin had something to say to entrepreneurs.

The St. Petersburg Economic Forum is being held for the 25th time, but under such conditions – definitely for the first time. One way or another, 56 percent of Russian exports, 51 percent of imports fell under sanctions, and 15 percent of Russian GDP are under threat. Much of the economy was under attack. 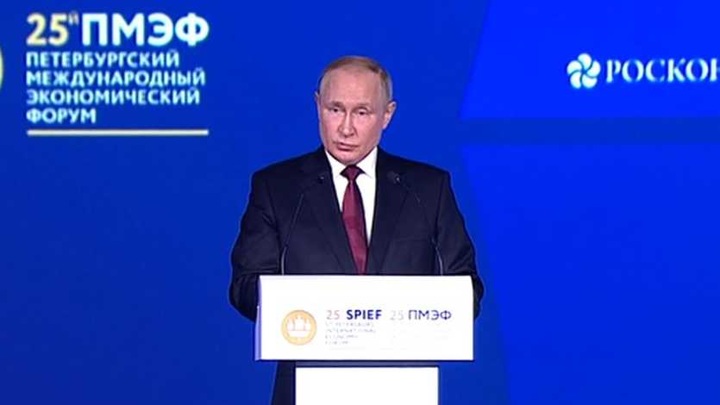 The situation is not easy, but there are no signs of the apocalypse in the forefront. Businessman Oleg Deripaska is expressively silent for the camera, but at the same time he smiles broadly. Business is looking for new solutions. The sanctions shock is over.

“Literally three months after the massive package of sanctions, we have suppressed the inflation surge. After a peak of 17.8 percent, as you know, inflation is now at 16.7 percent and continues to decline. The economic dynamics are stabilizing, public finances are stable,” Putin said. Of course, 16.7 percent is a big inflation. We must work with this and we will do it. And, I am sure, we will achieve a positive result.”

“According to the results of the first five months of this year, the federal budget was executed with a surplus of 1.5 trillion rubles, and the consolidated budget with a surplus of 3.3 trillion rubles,” the president continued. “Today, our task is to create conditions for increasing production, for increasing supply in the domestic market and, in a balanced way with the growth of supply, to restore final demand and bank lending to the economy.”

“Since May, the preferential mortgage rate has been reduced. Now it is 9 percent. At the same time, the preferential mortgage program itself has been extended until the end of this year. As I already said, the purpose of this measure is to help citizens solve housing problems, support the construction and related industries Millions of workers are employed there,” the Russian leader noted. “The Central Bank is lowering the key rate, in this regard, I consider it possible to once again lower the rate on preferential mortgages now to 7 percent.”

“What I would like to draw your attention to: the duration of the program remains the same – until the end of this year. This means that those of our citizens who want to improve their living conditions with this benefit must use it before the end of this year. The maximum loan amounts also remain : 12 million rubles for Moscow and St. Petersburg and 6 million rubles for other subjects of the Russian Federation,” the head of state said.

Preferential mortgages can be taken not only by families, but also by entrepreneurs who are ready to open new production facilities.

“In order for domestic business to be able to quickly expand the production of the necessary products, I propose to launch a fundamentally new tool – industrial mortgage. We are talking about preferential long-term loans at a rate of 5 percent per annum. Enterprises that plan to buy ready-made areas for production will be eligible for such loans,” Putin said. – I ask the government, without delay, to work out all the details with the banking sector of Russia, so that in the near future the industrial mortgage will work in full.”

It is the Russian industry that now has to fill the niches abandoned by foreign competitors. Import substitution is not a panacea, but for some positions it is better to have your own.

“For example, after the unscrupulous partners of KamAZ left the Russian market, their niche is now occupied by domestic companies. And we are talking about the supply of components not only for traditional models of the plant, but also for promising series, long-haul transport and heavy vehicles,” the president continued. “I would like to note the MIR card payment system, which has successfully replaced Visa and MasterCard in the domestic market. Now it is expanding its geography, step by step gaining international recognition.”

In addition to economic incentives, it is sometimes enough for business to simply not interfere. The President comes up with a revolutionary proposal – to abolish most business inspections.

“Now the number of scheduled inspections has decreased by six times compared to last year. The fact is that after the introduction of moratoriums on inspections, the number of violations by entrepreneurs has not increased, but decreased. And this speaks of the maturity and responsibility of Russian business,” Putin said. .

According to him, businesses need to be motivated, not forced to comply with norms and requirements.

“It means that there is every reason to take another cardinal step forward – forever, on an ongoing basis, refuse to conduct most inspections of all Russian businesses whose activities are not associated with high risks of harm,” the Russian leader said. “It is clear to everyone: there is no need to go and check everyone in a row. A risk-based approach should work. I ask the government to determine the specific parameters of such a reform in the coming months.”

“Another very sensitive topic for business – and today it is also a matter of our national security and economic sustainability – is to reduce, minimize all kinds of abuses, loopholes for pressure on entrepreneurs,” Putin continued. “We are consistently removing vague norms of criminal law. In the near future, a bill should be adopted to reduce the statute of limitations for tax crimes, as well as to refuse to initiate criminal proceedings after the full repayment of tax arrears.

Excessive checks have managed to turn into an instrument of pressure on business, as well as unfounded criminal cases.

“It is necessary to reconsider the grounds for detaining entrepreneurs and for extending the preliminary investigation. It is no secret that very often these norms are applied where there is no objective need. As a result, even at the investigation stage, enterprises are forced to suspend their activities or close down altogether. In this case in addition to direct losses and loss of market positions, jobs, the reputation of companies and their leaders is under attack,” Putin said.

The President drew the attention of law enforcement agencies to the need to put an end to this practice.

“I ask the government, together with the Supreme Court, to prepare appropriate amendments to the law. I ask that this work be completed by October 1 this year,” Putin said. “The number of such cases has increased significantly in recent years. Everyone understands what is behind this. Often, cases are initiated without sufficient grounds or are used to put pressure on companies or specific individuals.”

The economy must remain open, Putin believes, and must not close in on itself. But it should not work for offshores and “quiet island harbours”, but should benefit its own country.

The call to business to support the social sphere does not remove responsibility from the state. Against the backdrop of inflation and rising prices, decisions were promptly made on additional support measures.

Go forward, change, show will and determination. Use the new opportunities that time opens up for us.

China protests to US over US plane flying over Taiwan Strait

The exhibition “Tear of Memory” opened in Melitopol in honor of...

The President of Uzbekistan proposed to extend the term of office...

Over 1.6 million refugees from Donbass and Ukraine arrived in the...

China protests to US over US plane flying over Taiwan Strait