Home News Paul McCartney is 80! With what new deeds and songs does... 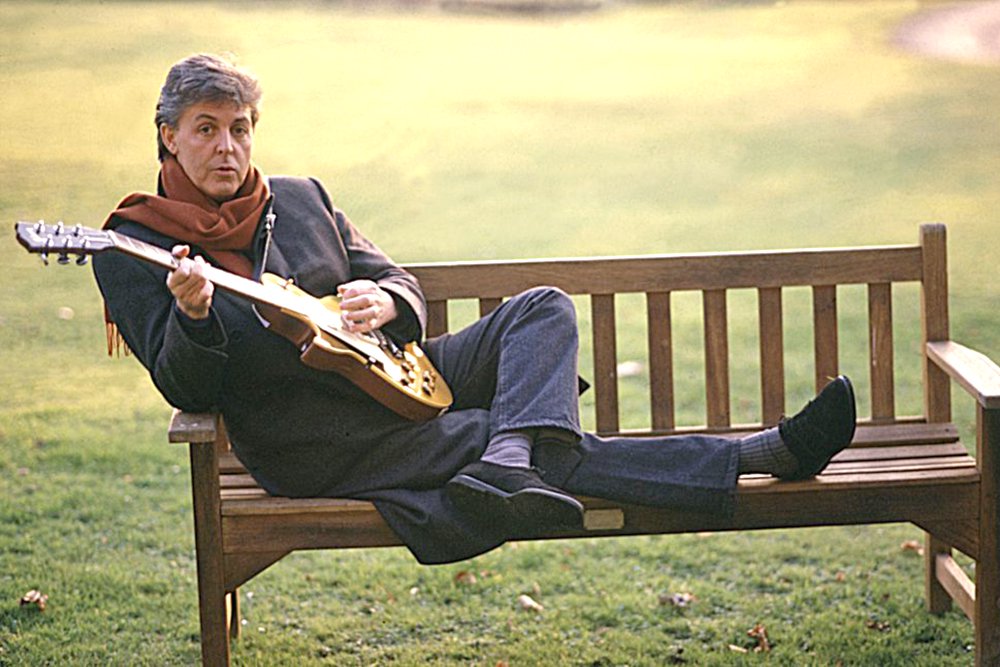 Sir Paul from his youth was incredibly charming, witty, friendly, but also practical. In the 60s, when The Beatles gave press conferences and John Lennon didn’t like the question, he cursed and slammed the door. And Paul McCartney smiled, took a “Moscow Art Theater pause”, and said affably: “Guys, let’s go and have a drink!”

Yes, he turned 80 on June 18, but since then McCartney seems to have changed little. After all, when a year ago at the Glastonbury festival he and the most successful singer in the world Taylor Swift were included in one line-up, and the releases of their albums were put on the same day – involuntarily bumping their foreheads – what would the rest do? Surely they would have been angry, expressed themselves in the press ?!

And Sir Paul simply invited a blonde beauty (probably with the consent of his wife) to his home. And she came – embarrassed and reverent, even embarrassed, which is not very usual for her character … Taylor Swift came out happy, smiling! They are with Sir Paul over a glass and a friendly conversation, separated by dates and concerts, and the release of albums. And there was one more person in the world who felt happy thanks to Paul McCartney!

During these 80 years, the legendary Beatle had many wonderful songs and instructive everyday stories. Let’s now talk about the most important and instructive – in each of his decades! Maybe some of them will be useful to us too?!

Paul McCartney (full name James Paul McCartney) was born on June 18, 1942 in the English city of Liverpool. His mother was a nurse and his father was a trumpeter and pianist. From the mother, probably, warmth, kindness, the ability to never lose heart were transferred. And from his father – friendliness, the ability to communicate and get along with people, as well as a sense of team: three of them played in the family ensemble: McCartney Sr. and sons Paul and Michael.

And the father liked to repeat to his sons: “You can be able to do one thing in life. But then you have to do it better than anyone in the world!” Surely, this phrase also helped Paul become both practical and purposeful!

Paul later recalled: “After the death of my mother, my father quickly brought us out of the childish state. And by the age of 12, I was actually a ready-made small salesman, attracting clients to the garden club …”

After the death of his mother, his father – wanting to at least distract Paul from the grief that was incinerating him – gave his son a pipe. And he quickly learned to play it, and then exchanged a guitar for this instrument. The first songs that Paul learned to play were rock ‘n’ roll: Long Tall Sally (later she will fall into the repertoire of The Beatles) and Tutti Frutti.

It was for their performance at the audition that he was taken to the Quarrymen group, where Ivan Vowen, a school friend of Paul and John Lennon, whom they met at a picnic in June 1956, played. And in 1959, their group got a different name – The Silver Beatles (the word Silver will soon be removed from it). Moreover, Paul then played the guitar in it, and had already persuaded John to accept George Harrison as a member.

Why did he switch to bass in the end? In 1962, Beatle bassist Stu Sutcliffe died of a cerebral hemorrhage. Neither John nor George wanted to pick up the bass. And Paul again rescued friends.

All the 60s are the years of The Beatles. Paul and John wrote songs together at first, but then they went their separate ways and each wrote separately. Although the author’s signature familiar to fans on Lennon-McCartney records was invariably left. Of course, they were both very different. John could talk for hours about what impression a particular song or musical phrase might evoke there. And Paul was more specific. He simply sat down at an instrument – a piano or a guitar – and began to weave a lace of melodies, sometimes singing some words.

And then he asked the others: “Maybe so?”. Then he played again and was interested: “Or is this option better?” By the way, it was The Beatles who introduced this wise rule – a song is taken into the repertoire if it is liked by all members of the group! How many teams broke up because he wasn’t followed?

By the way, the idea to create the most epoch-making album – Sgt. Pepper’s Lonely Hearts Club Band (although the Beatles have great discs!) With such a magical and diverse sound, it belonged primarily to Paul! When the group recorded, for example, A Day In The Life (its first part was composed by Lennon, and the second – McCartney), Paul said: “Let’s invite a symphony orchestra and let the guys play anything?!” But after long discussions with George Martin, he agreed to “only” 42 musicians and an arrangement. However, his demand is “let them come to the studio in tailcoats” did it anyway!

At the same time, the debate about which The Beatles song is the best is not fruitful?! Everyone has her own. But the most sought after is Yesterday, written in 1965 by Paul McCartney. There are already over 400 different cover versions of her made by musicians from many countries of the world.

By the way, it is dedicated not to some girl, but to the musician’s mother – Mary McCartney …

The official breakup date for The Beatles is April 17, 1970. On this day, Paul’s first solo album, McCartney, was released, in which he used the ability to play all musical instruments.

But Paul, after The Beatles, wanted to play again in the group, so he soon created it, calling it The Wings (that is, “Wings”) Together with his wife, singer, keyboard player and photographer Linda, and excellent musicians, for example, Danny Lane from The Moody Blues. This, too, was the difference between Paul and all the other Beatles.

He wanted him to have a team, and in it there was friendship, common interests, frequent rehearsals and creative searches together, and the rest – John, George and Ringo – in fact, worked solo, collecting session lineups as needed.

Officially, Wings disbanded in the spring of 1981, but in fact the group ceased to exist even earlier. But Paul was affected by the death of guitarist Jimmy McCulloch, who played with him for a long time. And especially – the murder at the end of 1980, John Lennon. After all, McCartney began to receive threatening letters. And he decided to take a break.

Not the most beneficial period, it was time for not very successful experiments either with jazz or with new wave – there was a feeling that Paul had not yet experienced the recent tragedies and emotional fatigue. But I found a way to overcome them. A man who always loved the team, friendship and co-creation, McCartney began to offer to work together with artists he respected.

First – Stevie Wonder (Tug of War), then Michael Jackson (Pipes of Peace), Elvis Costello (Flowers in the Ditr)… I confirmed to myself that the team is a great force! And again returned to the tops of the charts.

And back in 1988, Paul recorded the album “Back in the USSR” especially for our company “Melody”, collecting 14 of his favorite rock and roll and ballads from the 50s and 60s. And none of them were written by the Beatles themselves.

Three of these tracks were not included on the record. Including what a shame! – George Gershwin’s Summertime….

It’s funny that in the USA and Europe this album was released only in 1991, by Capital, under the license of Melodiya. By the way, they say that McCartney did not demand a fee for releasing the disc in the USSR. When he comes to us on tour again, we’ll ask.

It’s time for new big tours, the final transition to vegetarianism and the rejection of wooden furniture, both at home and in dressing rooms, as well as leather clothes. Well, on the eve of the release of the 1997 album Flaming Pie, Queen Elizabeth II of Great Britain awarded McCartney a knighthood. So he became Sir Paul.

And at the same time, it was not a happy decade for McCartney: in April 1998, his wife, Linda, died of cancer. One of her last photos is just in the Flaming Pie album booklet.

Grief forced the musician to leave the stage for a while, and in 2001 he released an album in her memory – Diving Rain

First visit to our country. On May 22, 2003, McCartney’s personal plane landed at Pulkovo Airport. On the same day, at 18.00 at the St. Petersburg Conservatory, the musician was awarded the diploma of an honorary professor. The next morning, Sir Paul went to inspect the treasures of the Hermitage. And then he went to Moscow.

Before the Red Square concert, McCartney decided to give a press conference. Among the questions was this:

And suddenly everyone heard how the crowd, standing in the distance, behind the fences, near the Mausoleum, gasped ….

Before the trip, Sir Paul learned a few Russian words and the phrase: “Give the guys a-a-a.” He spoke often.

Well, in the midst of the trip, raised a toast to Russia. He said in Russian in his ending: “To your health!” With a glass in hand.

It was also curious: when McCartney stepped onto the balcony, the crowd below began to sing the Beatles song All My Loving.

“We love you,” someone called from below.

“I love you too,” McCartney replied.

By the way, he flew to Russia with his new wife, Hitter Mills. In 2002, he married and moved in with her in New York.

Although the USA was not the happiest country for the Beatles: it was here, just in New York, in 1980 that a crazy fan shot John Lennon. And in 2001, George Harrison died in Los Angeles.

McCartney releases albums regularly again. All of them now have a special feature. One of the songs should be in Sir Paul’s new style, and another should be over seven minutes long.

And back in 2011, he first wrote music for a ballet, called Ocean’s Kingdom. But then (there were three more classic albums) he returned to rock music. The 2013 album NEW was especially successful. Moreover, McCartney held his presentation as this often happens with him, unusually: he came in a truck with equipment and musicians to one of the central squares of London and played there from the truck.

He began to write both children’s books and scripts for cartoons (Sir Paul has eight grandchildren).

Last year, Sir Paul released another album – McCartney III, which he, according to him, did not think to record.

But the musical quarantine began and he, left alone at home, listened to the drafts of songs he had accumulated, and composed new ones. Playing all instruments again, in his home studio Rockdown, on the farm – recorded with sound engineer Steve Orchard and released an 11-track album!

And now he is writing a sequel to his children’s book with adventures “Grandfather”. The main characters are himself and his grandchildren.

A creative, friendly and restless, talented person – there is always no time to be bored!