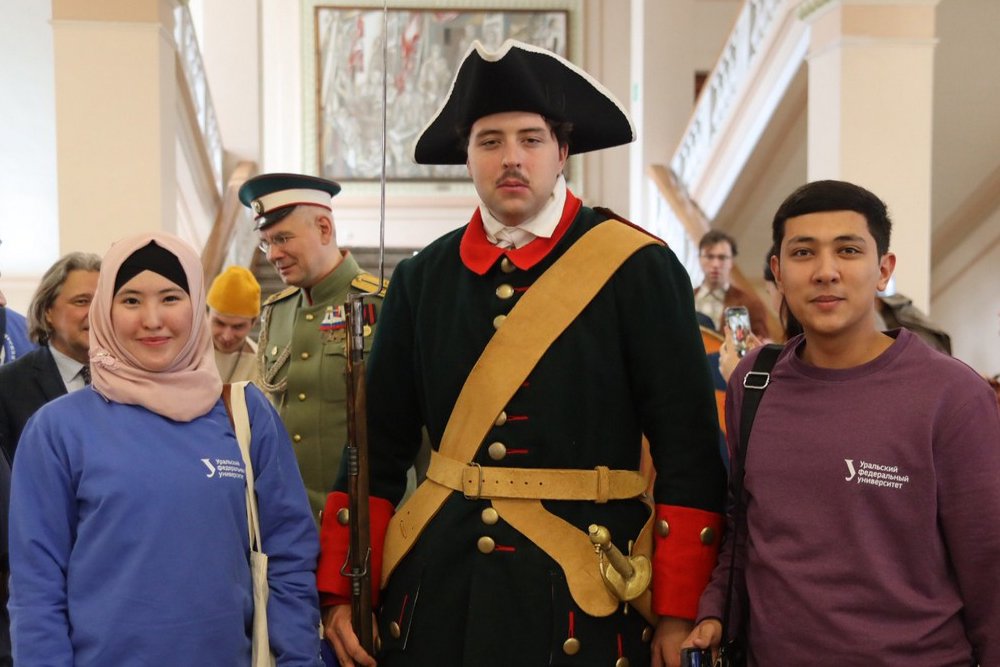 In the building of the Ural Federal University in the early morning, the guests were greeted by ancient Russian warriors, Peter I, the pilot of the times of the Great Patriotic War and the White Guard – this is how the clubs of reenactors welcomed more than 150 students and graduate students from 38 countries who came to Yekaterinburg to participate in the international winter historical school of the Russian Historical Society ( RIO).

Among them are historians, philologists, archivists, specialists in international relations, including those from the CIS states, Serbia, Abkhazia, who arrived under the New Generation program of Rossotrudnichestvo. Also among the listeners for the first time were students from the DPR and LPR.

The Historical School is held by RIO together with the Ministry of Science and Higher Education of the Russian Federation, the Civic Chamber of the Russian Federation, with the support of the Presidential Grants Foundation, the History of the Fatherland Foundation and Rossotrudnichestvo. The program is designed to help young people from near and far abroad expand their knowledge of the history and culture of Russia, meet with famous researchers, heads of academic institutions, archives, and museums.

– It is very symbolic that the 4th historical school is taking place in Yekaterinburg. This unique place at the crossroads of Europe and Asia, in a certain sense, symbolizes the fate of Russia itself, which is both in Europe and in Asia. I am convinced that at a time when deep tectonic shifts and geopolitical transformations are taking place, the role of historical knowledge is growing more than ever, – says Irina Velikanova, Director General of the State Central Museum of Contemporary History of Russia, member of the RIO Council. – A person who knows history gets the experience of critical reflection on events, and not just a set of dates, names and milestones. It is very important today, when both world history and the history of Russia are being falsified, to acquire this critical thinking skills.

According to Elena Druzhinina, Deputy Minister of Education and Science of the Russian Federation, the ministry, together with RIO, is working on a single standard for teaching Russian history. In the near future, the examination of 31 textbooks for universities will be completed, and its results will be presented on October 7 at a meeting of the expert council in Tobolsk. Today, the focus is on the approval of a mandatory minimum of four credits in the history of Russia. It will be taught, including not at the history departments.

– Knowledge of the history of one’s country is a fundamental component of the formation of a person’s personality, – Druzhinina emphasized in her welcoming speech at the opening of the historical school.

In addition to scientific battles, an interesting cultural program for the Ural museums and sights was prepared for its listeners. In particular, they will visit the border between two parts of the world and the largest private museum of military equipment in Verkhnyaya Pyshma. In addition, they will be told that the Sverdlovsk region, the only region that heraldists have allowed to put the inscription “Supporting edge of the state” on the coat of arms, as a sign of special merits, still fills more than half of the budget here with the mining and metallurgical complex and mechanical engineering. The Urals knew both the Pugachev uprising and the hot battles of the Civil War; Old Believers still live here, whose ancestors once fled from persecution from the central part of the country. The associates of Peter I laid the foundations of the local city-factories, and Bazhov and Mamin-Sibiryak wrote about the local way of life and customs, what later became known as the mining civilization.

– We hope it will be interesting. Traditionally, participation in the school means not only acquaintance with the history of Russia, but also a competition of historical and educational projects developed by teams. The winners will receive scholarships before the end of the academic year from the History of the Fatherland Foundation, provided that they have bank accounts in Russia, – adds Irina Velikanova.

– Conducting international historical schools in recent years has become a good tradition. It testifies that interest in the history of our country abroad does not dry out. The need for young Russianists in live communication with their Russian colleagues is only growing. The prepared program covers not only political, but also scientific, cultural and economic aspects of the history of Russia, its contribution to the development of neighboring states and all of humanity as a whole. I hope that the knowledge about the past received by the students of the school will help to better understand the logic of current events, navigate the turbulent information flows, and distinguish truth from fiction.